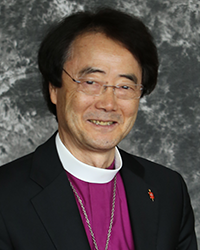 October 5, 2020 Dear Sisters and Brothers of Susquehanna Conference, Grace to you in the name of Jesus Christ, Prince of Peace, Healer of our Brokenness, and Hope of the World! The Virtual 2020 Annual Conference concluded on Saturday. We conducted the essential business of our Annual Conference. One of the pieces of business we…

Special Announcement from Bishop Park: Continuing Through the Pandemic

September 8, 2020 “By the tender mercy of our God, the dawn from on high will break upon us, to give light to those who sit in darkness and in the shadow of death, to guide our feet into the way of peace.” (Luke 1:78-89) “But those who wait for the LORD shall renew their…

September 1, 2020 Dear Sisters and Brothers of the Susquehanna Conference, Grace to you in the name of Jesus Christ, Price of Peace, Healer of our brokenness, and Hope of the world. As we enter into a new month and the school year begins for many of you, we are met with the reality that…

August 17, 2020 “Jesus said, I am the resurrection and I am the life. Those who believe in me, even though they die, yet shall they live, and whoever lives and believes in me shall never die. Because I live, you shall live also.” (John 11:25-26) “Be faithful, even to the point of death, and…

August 10, 2020 “But who am I, and who are my people, that we should be able to give as generously as this? Everything comes from you, and we have given you only what comes from your hand… All these things I have given willingly and with honest intent. And now I have seen with…

August 5, 2020 Dear Sisters and Brothers of the Susquehanna Conference, Grace to you in the name of Jesus Christ, Prince of Peace, Healer of our Brokenness, and Hope of the World! It is with great joy and thanksgiving to God that I write this letter. On Wednesday, August 5, 2020 Mission Central officially became…

“In the morning, O Lord, you hear my voice; in the morning I lay my requests before you and wait in expectation.” (Psalm 5:3) “Praise be to the Lord, to God our Savior, who daily bears our burdens. Our God is a God who saves; From the Sovereign Lord comes escape from death.” (Psalm 68:19-20)…

June 25, 2020 Dear Sisters and Brothers of the Susquehanna Conference, Grace to you in the name of Jesus Christ, Prince of Peace, Healer of our Brokenness, and Hope of the World! This letter is to let you know of another transition in the Cabinet. The Reverend Greg Myers, Clergy Assistant to my office who…

“God gives strength to the weary and increases the power of the weak. Even youths grow tired and weary, and young persons stumble and fall; but those who hope in the Lord will renew their strength. They will soar on the wings like eagles; they will run and not grow weary, they will walk and…

God also said, “When the time’s ripe, I answer you. When victory’s due, I help you. I form you and use you to reconnect the people with me, To put the land in order, to resettle families on the ruined properties. I tell prisoners, ‘Come on out. You’re free!’ and those huddled in fear, ‘It’s…

He received his D. Min. degree from the same school in 1990.

Jeremiah was first elected a delegate to the Jurisdictional Conference in 1996. He was elected a delegate to the General Conference  in 2000 and 2004. He served on the Vision Table, Program and Arrangements Committee, Board of Directors of the Multi-Ethnic Center for Ministry, and the Korean-American Mission of the Northeastern  Jurisdiction (NEJ). He served as Chairperson of the Conference Commission  on Religion and Race and the Multi-Ethnic Ministries Coordinating Committee.

He enjoys singing, tennis, hiking, travel and spending time with his children and their families.